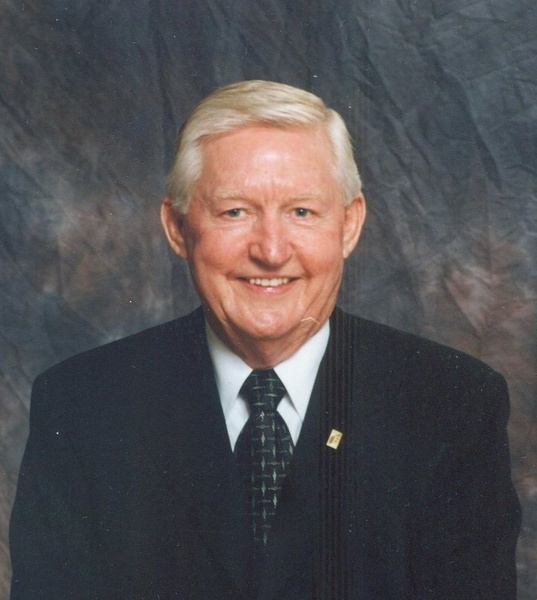 Billy was born in Micro, Johnston County, but lived most of his adult life in Wake and Montgomery Counties. He served in the US Army overseas in Korea and graduated from the University of North Carolina at Chapel Hill.

His career occupation and passion was banking, serving almost 40 years of a six decade span as the chief executive officer of Fidelity Bank. Billy’s philosophy that the bank is best served when the people of the community are served grew Fidelity from a small town bank into one of the most equitably sound and respected financial institutions in the state.

His belief in hard work, dedication, and self-improvement found an additional outlet in his commitment to Campbell University, serving as a Presidential Advisor and as a Trustee. His Christian leadership extended many years as an elder and deacon at Fuquay-Varina and Biscoe Presbyterian Churches.

Always looking to support charitable sources and provide opportunities for others, Billy was a founding member of the NC Community Foundation, whose mission is to provide philanthropic support at the community level.

He was the sitting mayor of Biscoe before moving to Fuquay-Varina to become President of Fidelity Bank. He was a Free-mason and instrumental in starting a Boy Scout troop #79 in Biscoe.

Mr. Woodard is survived by his wife, Mary Sue Farlowe; sister, June Howard of Kinston; brother, Kenneth of Frederick, Md; and children, Alan, Phil, Mary Willis and husband, Todd, and Matthew and wife, Kim. His six grandchildren were a joy to him in his brief retirement years. Billy worked full time hours until 2013, enjoying remarkable health and vitality. He succumbed to an aggressive form of pulmonary fibrosis at home with his family.

A memorial service will be held at 11:00 am, Saturday, November 12, 2106, at Biscoe Presbyterian Church with the Rev. Dr. Bruce Lax officiating. The family will receive friends following the service.

To order memorial trees or send flowers to the family in memory of Billy Thomas Woodard, please visit our flower store.