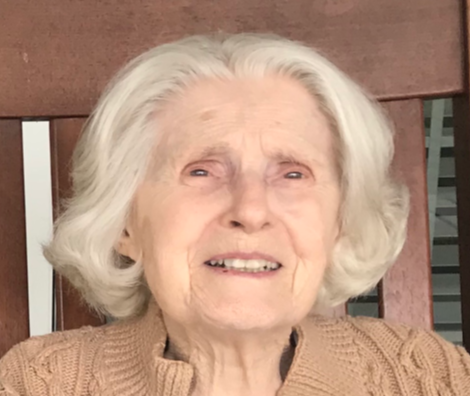 Geraldine was born on January 11, 1925, in Mount Gilead, North Carolina. She was the youngest of eight children of the late Thomas Platt Byrd and Bertha Lillie Mauldin. She is predeceased by her husband, Robert Hal McKinnon, son in-law Joseph Hutchens and her seven siblings.

She was a loving mother, wife, grandmother, great-grandmother and aunt. She loved life, had a strong faith and an incredible work ethic. She was an excellent cook and loved visiting with family and friends at her beautifully set tables. Her conversation skills were as remarkable as her cuisine. She had a keen sense of humor, and her wit help put people at ease and bring levity to even the most troubling situations. Her hobbies included gardening, playing bridge, and studying meteorology, nutrition and the stock market. She was a savvy and thoughtful investor.

Geraldine attended Women’s college of the University of North Carolina, and later pursued a career in business. While working in Albemarle, North Carolina, her best friend introduced her to a handsome, young former aviator on a blind date, Robert McKinnon. Gerry and Bob were married on April 21, 1946, in Mount Gilead, and remained married until Bob’s death in 1986. Bob’s career took them to Bishopville, South Carolina and later to Rutherfordton, North Carolina where they lived for almost 30 years. Gerry was very engaged in the Rutherfordton community. She was an active member of Rutherfordton Presbyterian Church, the Rutherfordton Woman's Club, Garden Club and the Lamar Stringfield Music Club.  She enjoyed hosting singers in her home when her music club sponsored the North Carolina Opera to perform in the Rutherford County Public Schools.  Music was always important to Gerry and her family.  She also served as a Girl Scout Leader.

Whenever she learned of a family in the community who had experienced a tragedy, she immediately prepared a complete meal and delivered to the family, often along with a lovely flower arrangement. These meals would generally supply nourishment to large groups of people for many days. Gerry moved to High Point, North Carolina a few years after Bob passed away so that she could be closer to her daughters and her sisters. Gerry loved playing bridge with her friends, volunteering for Meals on Wheels, entertaining family and friends, and participating in family gatherings and celebrations in High Point, Raleigh and Linville, North Carolina. She especially enjoyed the annual “Gathering of the Clans” at Grandfather Mountain and visiting with fellow Clans people at the McKinnon tent. Geraldine Byrd McKinnon was a strong, courageous role-model who exemplified the importance of faith, family, friends, hard work and service to one’s community. She leaves a profound legacy.

The family requests that memorial contributions be made to the Hospice of the Piedmont- 1801 Westchester Drive, High Point, NC 27262, or the charity of one's choice.

Services will be private.

The McKinnon family is being served by Phillips Funeral Home in Star.

To order memorial trees or send flowers to the family in memory of Geraldine Byrd McKinnon, please visit our flower store.