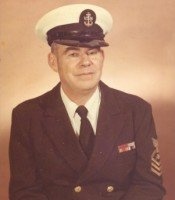 Biscoe- Chief Petty Officer (CPO) James Atlas Williamson, U.S. Navy Retired, departed on his everlasting assignment with the Lord on, December 13th, 2012. He served over 20 years in the U.S. Navy as a Boiler Tender Technician (BTC), and traveled numerous tours around the world.

He was born on June 27, 1925 to John Atlas and Emma Williamson, in Norman, North Carolina. Chief Williamson had a love for steam engine locomotives, and that love, coupled with his desire to serve his country, guided him to join the U.S. Navy on October 9, 1943, to support the Navy during World War II. Upon the end of World War II, CPO Williamson decided to make the U.S. Navy a career. He served, not only in World War II, but also during the Korean Conflict, and the start of the Vietnam Conflict era. He retired from the U.S. Navy on December 6, 1963, in Memphis, Tennessee.

After retiring from the U.S. Navy, Chief Williamson returned with his family to Biscoe, North Carolina, which was his final relocation. In civilian life, James worked for over 20 years in the textile, and furniture manufacturing businesses. He also was a small scale farmer, and he enjoyed hunting and fishing.

Survivors include his loving and caring wife of over 64 years, Marion I. Batten Williamson of the home, daughters and their spouses, Audrey C. McDowell and Bobby of Raeford, NC, Barbara E. Hayes and Calvin of Seagrove, NC, and son and spouse, James Arnold Williamson and Carlene, of Biscoe, NC. He also has five grandchildren, Mary McDowell, of Vass, NC, Chantal Tuttle, of Boone, NC, Jacob Tuttle, of Norfolk, VA, Carla Williamson Vickery, and Peter, of the U.S. Air Force Academy, CO, and John Williamson of Greenville, NC, and one great-granddaughter, Lily Vickery of the U.S. Air Force Academy, CO.

Funeral Services will be held at Biscoe Presbyterian Church on Wednesday, December 19, 2012 at 2:00 PM. James has the honor of being the only member to have 33 years of Sunday School perfect attendance. Mr. and Mrs. Roger Batten, and Dr. Bruce Lax will be conducting interment services. Burial, with full military honors, will follow at the Biscoe Cemetery.

In lieu of flowers, the family requests donations to be made to the Biscoe Presbyterian Church at PO Box 638, Biscoe NC 27209, or First Health Hospice at 150 Applecross Road, Pinehurst, NC 28374.

Funeral Services will be held at Biscoe Presbyterian Church on Wednesday, December 19, 2012 at 2:00 PM. Interment will follow in Biscoe Cemetery.

To order memorial trees or send flowers to the family in memory of James Atlas Williamson, please visit our flower store.