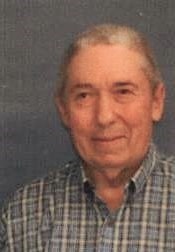 Mr. Britt was born in Montgomery County on November 21, 1925, to John Gainey Britt, Sr. and Viola Ector Eaton Britt. He was a member of Star Presbyterian Church and served as treasurer for many years. He was a retired farmer and was a US Army veteran of World War II, where he received a Purple Heart.

In his spare time, he enjoyed playing musical instruments and singing in the Gospel Four and with Gene and Jerry Britt.

In addition to his parents, he was preceded in death by his wife, Bonnie Smith Britt and his sisters, Ector Kinney and Evelyn Epps.

He is survived by his daughter, Dawn Covington and husband, Warren, of Star, and three grandchildren, Amanda, Britt, and Kurt Covington.

The family will receive friends Wednesday, November 28, from 6:00 – 8:00 PM at Phillips Funeral Home.

The funeral service will be held at 3:00 PM, Thursday, November 29, at Star Presbyterian Church with the Rev. Kim Stamey officiating. Interment will be in the Old New Hope Church Cemetery.

To order memorial trees or send flowers to the family in memory of John Gainey Britt, Jr., please visit our flower store.