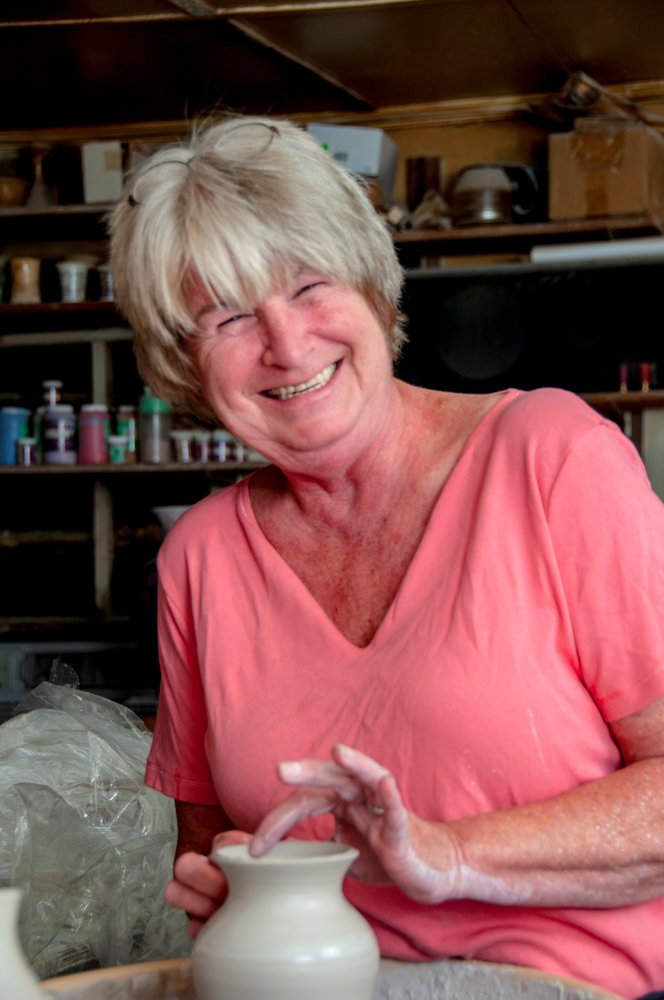 On the night of February 17th, Julia Smith Morgan went to be with her Lord surrounded by friends and family after a short battle with cancer.

Julia was born November 2nd, 1951 in Troy, NC. She married Phil Morgan 48 years ago and started the world renowned Phil Morgan Pottery in Seagrove, NC. Julia was a talented artist known for her hand painted and hand carved pottery.  She was also an accomplished sculptress famous for her handmade Angels, Chickens, Fish and Face jugs.  Mostly she was known for her joyous spirit and amazing ability to overcome any  hurdle and solve any problem.

She was strong and smart, sweet and kind. She could build a log cabin or pull a thorn from a paw without even a whimper. She never met a stranger. She was never intimidated. Everyone was family from the moment she met them. She was a genuinely good soul. She could spin a yarn with the best of them or cure what ails you with an old country remedy. You were always better for having met her.

Julia was preceded in death by her parents, David Ernest Smith and Bertha Enola Miller Smith, and her beloved pets, her sweet dog Pookie passed in October.

A visitation will be held Wednesday, February 20th, from 6 pm to 9 pm at Phillips Funeral Home in Star.

A Celebration of Julia's life will be held at Phillips Funeral Home at 2 pm on Thursday, February 21th, at 2 pm followed by a short cemetery service at Biscoe Cemetery.

Donations can be made in her name to St. Jude's Children Hospital or North Carolina Service for the Blind.

To order memorial trees or send flowers to the family in memory of Julia Smith Morgan, please visit our flower store.